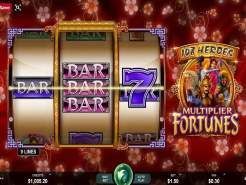 Play Now
Microgaming is the inspiration and the virtual fuel behind 108 Heroes Multiplier Fortunes , an intriguing animated, slot coming soon to an online casino near you.

108 Heroes Multiplier Fortunes, is a three reel game with nine pay lines, packed with the mysticism of ancient China, along with prizes and rewards. Because this an Asian themed game, all the symbols reflect the far east, and that of the band of warriors who have come together to hold down the fort so you can win some prizes and cash in this highly anticipated sequel. The main feature in this game is all about the multiplier wilds. The female warrior serves as a double winning multiplier. If it lands on the first reel, she will take up the whole reel. The male warriors serve as a three times multiplier and a five times multiplier as well. If you manage to land all three on the center reel, then you will earn a grand multiplier of 10 times. In addition, if you land a win through wild symbols on the first and third reels, then you will be granted a free re spin. Not to be overlooked is a four times wild warrior as well. The other symbols include, traditional red sevens, double bars, single bars, triple bars, purple sevens, and playing card numbers. The goal is to land three of a kind on the pay line to notch a win. Depending on which currency you are playing with, you can place bets as lows as two pennies or 15 cents. You can also adjust the coin sizes up to 4. There are credit buttons conveniently placed on the game screen screen so you can wager single credits or the max in one full push. You can also play through auto play mode so you can sit back and let the epic battle of these heroes, play out. Coming soon to an online casino near you, is Microgaming’s 108 Heroes Multiplier Fortune, the highly anticipated sequel to the smash hit, 108 Heroes. This title will come fully optimized for both desktop and mobile device users. And because it is flash based, you will be able to either play it instantly online, or download it to your preferred smart device, so you can play it right in the palm of your hand.
Play Now