The Phantom of the Opera Slots (Microgaming) 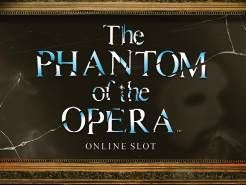 Play Now
The world famous opera play, reaches new heights, this time on an online slot form version of Phantom Of The Opera Slots , brought to you by Microgaming.

Staying true to form with Andrew Lloyd Webber’s famous play, Phantom Of The Opera comes in five reels with 243 pay lines which includes everything this world renown opera contains plus cash and perhaps a fat lady singing. All the main characters from the famous play will make an appearance here, including actual film footage of the opera, playing throughout the game. The main wild symbol is the official game logo, Phantom Of The Opera. Any one of these that land on the pay line will double winning combinations. The more that you land, the greater the impact on winning combinations will be. A major symbol to look out for, is the chandelier. Just a prominent in the play, if the chandelier drops at random, it can turn up to three reels completely wild, bolstering winning combinations. The scatter symbol consists of the legendary phantom mask. Getting three of these to land is the key to launching one of the three bonus rounds. You will be taken to a screen where you get to choose either the music of the night bonus round, the masquerade bonus round or the all I ask of you bonus round. In the music of the night bonus round, you begins with ten free spins where there are up to five random wilds on up to reels. There are also up to 5 expansive spins that carries a winning multiplier up to four times. In the masquerade bonus round you will pick among a group of masks, each one containing their own unique prize which also comes with the chance of extra picks. In the all I ask free spins bonus round you are granted 10 free spins with dancing wilds. The major symbols can turn wild, dance and shift positions on the reel. And if they land in the same position, you will be granted a 3 times winning multiplier. And if they all land on the same reel, the entire reel will turn wild. General wins are determined by getting three of a kind to land. They can land in either direction, horizontally and vertically and when you do score a win, the icons will animate.
Play Now